I have a secret that only five hundred of my closest friends know.  Shhh!  I will tell you too.  I have an obsession with the ’90’s sitcom “The Nanny”.  Perhaps it takes a special kind of personality to fully appreciate its humor. I guess I have that personality because it can send me into uncontrollable laughter even when I am in a bad mood.  I find it hard to understand why everybody does not enjoy it as much as I do.  My children balk every time I say, “This reminds me of an episode of ‘The Nanny'”.  Perhaps that is because so many things remind me of “The Nanny”.  Since I could not within my family find those who share the same degree of appreciation that is so deserving of this show, I had to look elsewhere for a “support group” to help me properly bask in the joy this show has given me.

Luckily for me, one of the stars of “The Nanny”, Charles Shaughnessy [aka Maxwell Sheffield, Broadway producer; How do you like your eggs?  (The Nanny, Pen Pals, Episode 3.1)] has been successful at maintaining a community of online fans through Facebook.  We all have followed his personal fan page as well as his “Only Connect” blog page.  It is a community wherein we share our love not only for “The Nanny”, but for Charles Shaughnessy as well.  Now before you come to the conclusion that our admiration for him is based solely on his extraordinarily good looks, let me assure you that you would only be partly right.  We appreciate him for his character, his compassion, his generosity, as well as many other wonderful qualities.  As a group, we have come also to have a great appreciation for one another.  I think the friendship that is found amongst his followers is a tribute to the kind of people Mr. Shaughnessy attracts.

Perhaps it would be impossible for those who do not share this common bond to understand the thrill we all experienced a few months ago when Mr. Shaughnessy announced that he would be starring as Professor Henry Higgins in the musical “My Fair Lady” at the North Shore Music Theater in Beverly, Massachusetts during the month of June.  For those who were able, we began to plan our summer around this event.  I am one of the lucky ones.  The opening week of the show coincided with my more-handsome-than-Mr. Shaughnessy husband and my 28th wedding anniversary.  So, we decided to celebrate our anniversary and my long over-due graduation from college by taking a week-long trip to the Boston area.  We arrived four long days before the day of our selected showing.  Sure there was plenty to keep us busy in the interim, but seeing “My Fair Lady” was definitely the main event.

Well the day finally arrived for us to take the journey from Boston to Beverly.  We had only been in Beverly for just a few minutes when we met Cassandra Marsh, the assistant musical director/rehearsal accompanist for the production.  She immediately began telling us of Charlie’s kindness and of his wonderful portrayal of Henry Higgins.  She even said, “You know sometimes when I see him from the side I actually think it is Rex Harrison! Charlie was made for this part.”  This only served to raise my already high expectations for Charlie’s performance.  Could he live up to them? 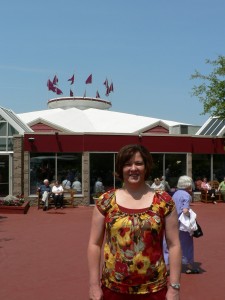 In front of the North Shore Music Theater

Soon we found ourselves in the beautiful North Shore Music Theater.  Having never seen a production in the round, I was curious as to how it would come off.  I can only say that it was absolutely “loverly”.  It was so enjoyable watching the creative methods of entering and exiting the stage.  The choreography utilized the stage in a way that optimized the viewing from every position in the theater while the performers did an exceptional job engaging the entire audience.

Charlie’s performance was outstanding.  In choosing the part of his performance which was most enjoyable, I am torn between the melodic tone of his voice during such songs as “I’m an Ordinary Man” and his emotional display of anger and frustration just prior to ‘Liza’s departing.  When Henry Higgins thought he had lost ‘Liza forever, Charlie portrayed the pain in such a way that one could easily feel the depth of his agony. Finally, he perfectly blended the melodic with the dramatic in his rendition of  “I’ve Grown Accustomed To Her Face”.

His co-star Lisa O’Hare, was equally as impressive. From the mispronunciation of her “oohs” and “aahs” through her transition into lady Eliza, she was a delight to behold.  Her exquisite voice and performance of “I Could Have Danced All Night” was one of the highlights of the day. She radiated beauty and sophistication as she engaged the audience with her piercing eyes.

From Peter Cormican as Colonol Pickering to the cast ensemble, the supporting cast was invaluable. They brought enthusiasm and merriment that added to the great success of the entertainment.  Hayden Tee as Freddy brought a beautiful tenor voice to “On the Street Where You Live” which was captivating.  Bill Dietrich as ‘Liza’s father brought jocularity that could be found in even his slightest movements. 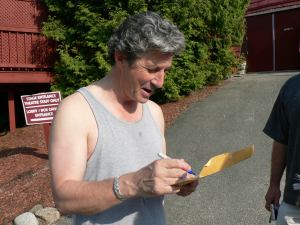 The performance was a grand success and one which I hated to see end, but there was still something for which to look forward.  We wandered over to the performers exit and waited with another couple for only a few minutes before the actors began to exit.  As Peter Cormican was leaving we complimented him on his performance as Colonol Pickering.  He politely thanked us as he passed, but then came back and had a quite lengthy conversation with us.  He was a wonderful man and he also expressed his positive impression of Charlie.  He said that Charlie was so genuinely kind and way to modest.  I wondered, is there anyone who does not love Charlie.  As we continued to wait, Lisa O’Hare exited.  She asked if we were waiting for Charlie.  When we answered in the affirmative she volunteered to go in and tell him.  We were greatly surprised by her willingness to do this considering that she now had less than two hours before her next performance.  Soon Charlie arrived and unnecessarily apologized for keeping us waiting. He was charming and indulged us with his autograph and photo opportunities.  Much to Laura Catena’s delight, he even autographed  @sillywabbit40’s Extremely Random Tweets To Charlie and laughed while doing so.

Earlier in the day I had texted a friend “On my way to meet Charlie. Will he meet my expectations?”  I am happy to report that he not only met them, he exceeded them.  My only regret is this wonderful day had to end and that all of Charlie’s fans do not have the opportunity to see him perform in this most wonderful musical “My Fair Lady”!

My husband and me with the "creative genius"

Charlie has once been described as a “creative genius”.  His performance as Henry Higgins certainly justify this description, but for those of you who have not yet heard of his newest ventuOre, Charlie and his brother, David, have recently begun an interactive online lifestyle magazine featuring the delightful Lisa Coffey and the new hyperspot technology.  Check it out at Coffeybuzz.com and click on anything on the screen.  You will notice that once you click, a thumbnail of the item will appear to the right of the screen where you can click again and be taken to the website featuring that item.  This new technology might change the way you shop.  Charlie a “creative genius”?  I think so, but I admire him for his charm and great character, something of which the world could use a little more.  Thanks for a great performance Charlie, to you and the rest of the cast!

21 responses to “My Fair Charlie”